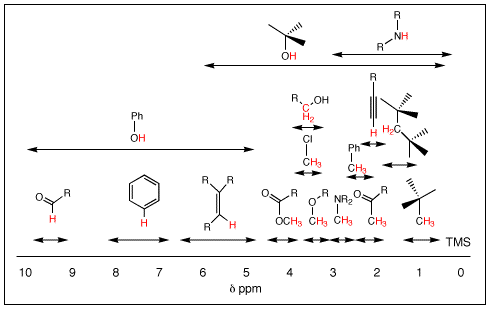 Nuclear Magnetic Resonance Spectroscopy (NMR) is most effective and efficient technique in structure elucidation of unknown organic compounds. There are various types of NMR techniques like proton, carbon, nitrogen and phosphorus NMR but among them, 1H-NMR is most common and widely used to get an idea of hydrogens and their exact location in the organic compound. There are various factors which affect the chemical shift of different type of protons in the compound, one of major factor is electron withdrawing group (causes deshielding, downfield shift) and electron donating group (cause shielding, upfield shift) of a nearby proton which affects their chemical shift in NMR spectra. Splitting of the peaks in NMR spectra tells us about the number of surrounding protons. Following chart depicts the approximate chemical shift of different kind of protons: