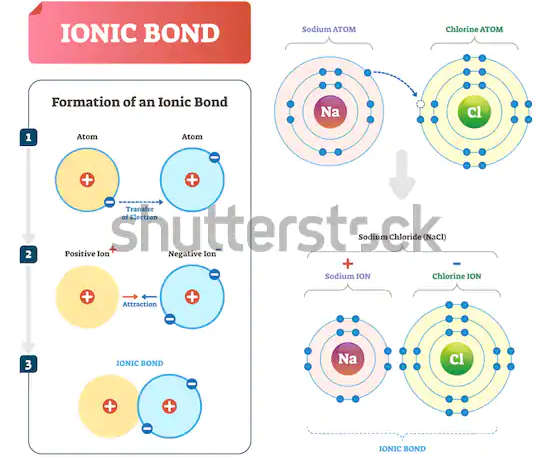 It is a type of chemical bonding that occurs between oppositely charged ions which involves electrostatic forces. This bonding is the first interaction between the ions. Anions are negatively charged ions that have gained an electron. On the other hand, cations are those ions that contain positive charge after losing an electron.

In other words, ionic bonding is a bonding between a metal atom and non-metal and the bond formed is called ionic bonds. A bond is called ionic when an ionic character is more as a comparison to covalent which means electronegativity difference is more in two atoms.

There are some characters of ionic bonded molecules:

It is a common table salt sodium chloride. Sodium loses its electron to form cations and chlorine gain electrons to form anions. Then they react with each other in equal ratio to give sodium chloride.

The above picture is representing ionic bonding between lithium and fluorine to give lithium fluoride. However, lithium easily loses its electrons due to low ionization energy and give it to fluorine and fluorine easily accepts those electrons to complete its octet and form an ionic bond.

Ionic compounds usually make lattice structures in solid-state. These structures can be easily determined by using the charge and size of ions. Pauling rule is one way to analyze the structure of the lattice.