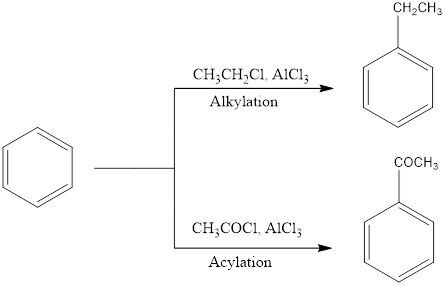 Friedel-Crafts alkylation and acylation reactions have few similarity and dissimilarities. For example, as shown in above figure both of the reactions require carbocation/acylium ion and AlCl3 for a reaction but in alkylation, rearrangement is possible to more stable carbocation while acylium ion is not prone for rearrangement. In alkylation, multiple substitutions are possible on benzene ring while in acylation due to deactivation of benzene ring (through carbonyl group of acyl), multiple substitutions is limited.