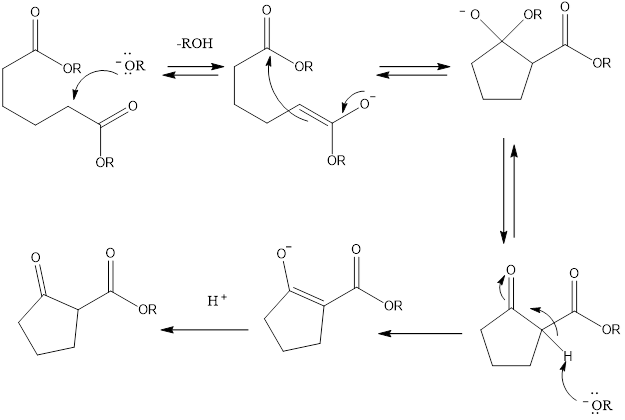 It is a ring-forming reaction to form cyclic β- keto ester by reaction of diesters with the base. It leads to the formation of 5- and 6-membered cyclic β-keto esters via intermolecular condensation in presence of a base.

The reaction was discovered by German chemistry Walter Diekmann in 1894. The reaction has a same intermolecular mechanism as Claisen Condensation.

Mechanism of action– There should be the presence of one ester group with α-hydrogen, this ester group with α-hydrogen undergoes deprotonation by the attack of a base to form enolate ion and alcohol leave out. The enolate ion attacks another ester group, releasing alkoxide group to form cyclic enol. Then alkoxide takes out the acidic alpha proton of cyclic ketone and then protonation with acid finally forms a β-keto ester.

There is the formation of 5- and 6- membered product due to their steric stability, with 1,6 diesters five-membered cyclic β-keto esters and with 1,7 diesters six-membered β-keto esters will be preferably formed.