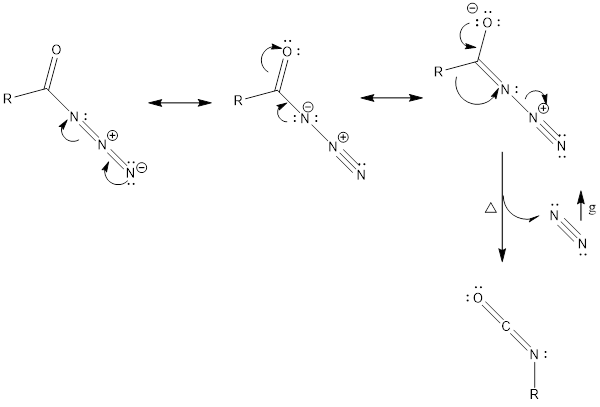 Curtius rearrangement reaction is named after Dr. Julius Wilhalm Theodor Curtius, who proposed it in 1885.
The reaction is thermally dependent, which converts acyl azide into isocyanate.

The reaction rate is influenced by the presence of protic acid and Lewis acids as it decreases the temperature required for decomposition and enhances the yield of isocyanate.

The reaction can be performed for conversion of carboxylic acids like aliphatic, heterocyclic, alicyclic including aromatic into amines in presence of water. The formation of amines also decreases the carbon number by one.

Mechanism of action: It involves basically alkyl shift, where R group attached to carbonyl carbon moves to nearest nitrogen and in turn, nitrogen gas is released, which finally forms isocyanate.

The isocyanate can react with water to form carbamic acid which is unstable spontaneously undergo decarboxylation to yield primary amine.

Isocyanate as a monomer has wide application in industry as it is used as paint hardener, in polymeric reactions forming polyurethane rubbers and thermoplastics etc.