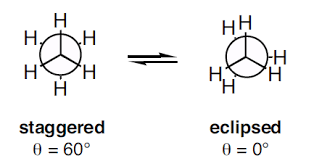 A different arrangement of the atoms in the space by rotation about the carbon-carbon single bond is known as conformers and collectively called as conformational isomers. These are inter-convertible by rotation of single bond.

The potential energy of these conformations reveals that staggered conformation is more stable than Eclipsed conformation by 3 Kcal/mol (due to steric or Van der Wall repulsion between overlapping hydrogen).