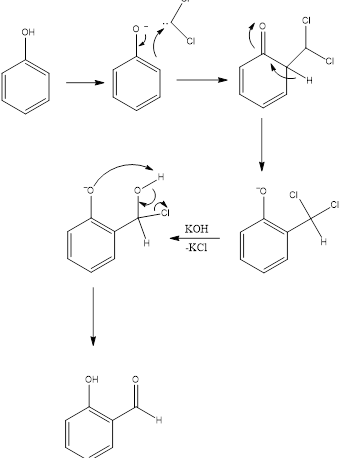 Reimer- Tiemann reaction is an organic reaction which forms hydroxybenzaldehyde from phenol in the presence of chloroform and base. The reaction is named after Karl Reimer and Ferdinand Tiemann who discovered reaction in 1876. The general reaction is the conversion of phenol to salicylaldehyde.

The reaction takes place in a biphasic solvent as the base is not soluble in chloroform. So, there is one aqueous and one chloroform layer. To bring together the layers mixing is done, or phase-transfer catalysts are used, or use of an emulsifying agent is there.

Mechanism of Action: Firstly, dihydro carbene is formed from chloroform. Chloroform gets deprotonated in the presence of a base to form carbanion which readily loses chloride ion and finally, dichlorocarbene is formed which is highly reactive. Then phenol gets deprotonated to form phenoxide and this attacks on carbine formed, which leads to the formation of intermediate dichloromethyl substituted phenol. In the final step, there is an attack of the base which leads to hydrolysis to form benzaldehyde.  The primary product is orthohydroxybenzaldehyde, along with para hydroxy benzaldehyde in less amount. 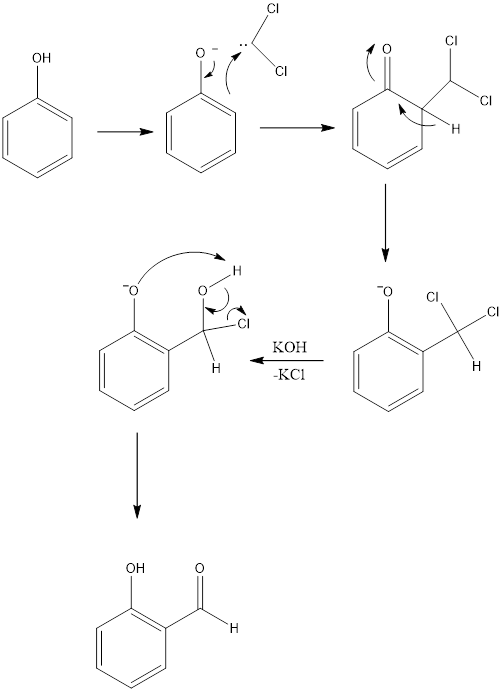 The Reimer- Tiemann reaction can also form salicylic acid if the reaction is carried out in carbon tetrachloride instead of chloroform. The reaction is used for formation of aromatic hydroxy compounds like naphthols.