Diel-Alder reaction is a type of cycloaddition reaction. There is cycloaddition of a conjugated diene with an alkene to form cyclohexene. The reaction was first discovered by Otto-Diels and Kurt Alder in the year 1928 and their work was applauded with Nobel Prize in chemistry in the year 1950.

There is the formation of stable two sigma bonds from two pie bonds. The reaction is highly regioselective and stereoselective. It is referred to as cycloaddition reaction as the cyclic product is formed through the cyclic intermediate state. 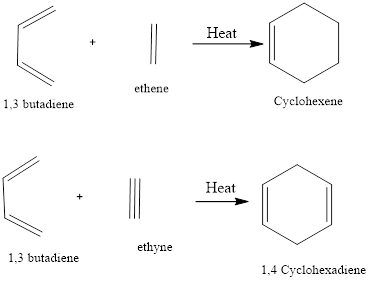 Mechanism of action it involves the concept of orbital symmetry and there is   cycloaddition. There is suprafactheial/suprafacial bonding of 4 system (diene) with 2 (dienophile) and this reaction is thermally allowed. According to frontier orbital concept HOMO (highest occupied molecular orbital) i.e. diene interacts with LUMO (lowest unoccupied molecular orbitals).

Stereochemistry involves if dienophile is twice substituted with cis substitution then it will form cis product and vice versa if there is a trans substitution.

Diels-Alder reaction forms the basis for the formation of vitamin B6, certain steroids, reserpine, taxol, and cyclopentadiene industrially.