Buchwald-Hartwig amination is a cross-coupling organic chemistry reaction where aryl halide is coupled with an amine in the presence of a palladium catalyst and a strong base to form a carbon-nitrogen bond. The reaction has been discovered by Stephen L. Buchwald and John F. Hartwig in early 1983 and their work was first published in 1994.

Mechanism of action– Firstly in reaction oxidative addition of aryl halide with palladium takes place, and then amine gets coordinated with palladium. Further, amine gets deprotonated by the strong base which leads to the formation of amide, this amide group attacks palladium and halide group gets released. At last reductive elimination takes place which forms aryl amine products along with the regeneration of the catalyst. 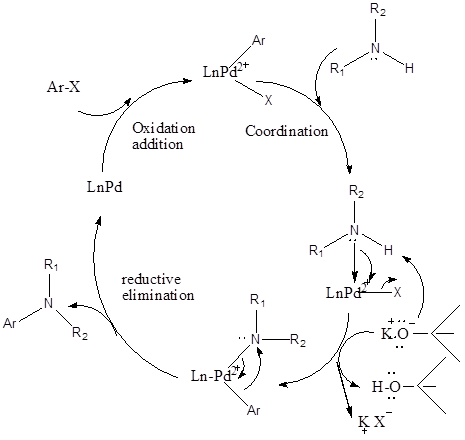